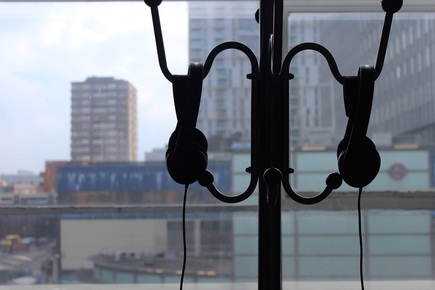 “Urban spaces, narratives, and subjectivities are thus understood as the products of cities and bodies mutually writing each other” … (Collie, 2013)

Comprising seven listening stations, Narrating the Urban Space occupies a place in which visual elements and sonic layers meet and merge. Exploring the relationship between the interior and the exterior of the architectural space that consists of human interaction, the installation encourages an engagement with everyday occurrences on the outside and simultaneously with the sounds projected on the inside, focussing on the divisions between public and private space by projecting the inner sounds out and bringing the outer sound in.

“Bodies project themselves onto their sociocultural environment so that this environment both producers and reflects the form and the interests of the body. Introjections and projections involves a complex feedback relation in which neither the body nor its environment can be assumed to form an organically unified eco system.” (Grosz, 1995, p.242)

Traveling through themes and subjects that consist of personal narratives, memories, time and motions, this site-specific sound installation invites one to position themselves within a space that is dominated by the surroundings of CRiSAP and London College of Communication. Narrating the Urban Space is a site specific installation that projects documented sounds of New York City’s Grand Central Station. The sounds embody the personal space as well as the physical space thus, moves through the space with an attempt to allow each listener a personal and intimate experience, (a solo experience and the syncing of sounds) turning the inside out and the outside in. Situating itself to overlook Elephant and Castle’s underground Station, it draws upon the questions, what does a sound belong to? Where do we belong? As one listens, the outside view accompanies the sounds projected from headphones, forming one illusion. The Underground sounds, traffic signals and fractured conversations mirror the views on the outside, creating a cinematic approach, the place becoming an extended instrument.

“Stories about place produce a second, metaphorical geography of the city, insinuating other routes through which everyday urban practices are organised and given meaning. Stories, as enunciations, create space via an “enunciative focalization” that inserts the speaking body into the text”. (Collie, 2013)

The crossing of boundaries between cities and identities are not entirely distinguishable until the headphones are removed. As a place of commute, bodies, situations and activities are constantly changing, however the sounds remain similar. Built with reference to a specific place (however abstract in form), this site specific installation draws upon the relationship between cities and bodies, and distinguish between the two, with the attempt to suggest an embodiment and a sense of belonging to a chosen place as the spectators interaction becomes the completion of the work.
Consisting of a sculptural like assemblage, existing as a centre piece within the room, the stable and present position creates a spacious hearing, allowing the connecting bodies to merge as the experience is accessible for more than one interaction at time, resulting to a public organisation with restricted viewing.

“Addressing the public (when considering Max Nauhaus' New York based installation - Drive in Music 1967) producing objects and events in conversation with bodies and spaces, thereby undoing the art object for a more integrated and live experience, Neuhaus invites an audience or listener to claim the work for him or herself, “where the shifting location was suddenly enhanced to become one’s very own musical performance”. (Neuhaus, 1967)